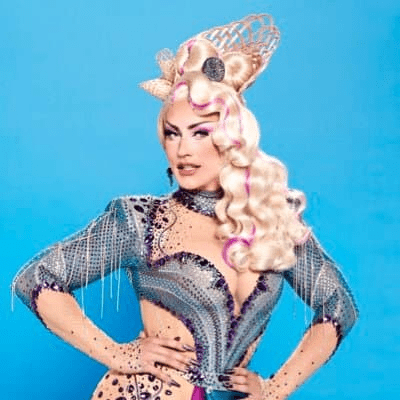 Ella Vaday (Nicholas Collier) is an actor and dancer. She is also a contestants of the third season of RuPaul’s Drag Race UK.

Vaday is British by nationality.

Her real name is Nicholas Collier while Ella Vaday is her stage name on the third season of RuPaul’s Drag Race UK.

She explained the origin of her stage name, Ella Vaday.

“When I was working in the West End, I also ran my own dog walking business, so I’d be running around all day, and then when I’d go to work I would say, ‘it’s been a hell of a day!” It’s very me – very British and a little bit moany. I used to call myself Ella Vanass, but everyone thought I was saying Elephant Ass, so I scrapped that!”

Vaday went to Bird College in Sidcup, a musical theatre college from age sixteen to nineteen.

She was born and raised in Dagenham by her parents alongside her brother.

Ella is in a relationship with her partner Marco.

During an interview when asked how her relationship has changed over the years, Ella said: “Lots has changed in the almost ten years we’ve been together, it’s impossible for it not to really, when you buy a house and get a dog together.”

“We’ve got a great relationship because if I say “I’m going to build a wall” he would be like “yeah go on then”, we back each other up and support each other no matter what, which is great. Our relationship has got stronger and stronger as the years go on because we understand each other so well. I know when he needs space, he knows when I need space, or when I’m about to start screaming he will sort it out before I do scream, like in my drag room, it’s such a mess at the minute, he knows to help me find things before I start going off!.”

Ella narrated how her coming out story was like.

“Well, it was an odd one because I went to musical theatre college from age sixteen to nineteen, where you’d think it would be the easiest place to come out as gay but I didn’t want to be gay and suppressed the feelings for so many years.

“So I didn’t come out until I was like twenty or twenty one, I didn’t really tell anyone when I was at college that I was confused about my sexuality, it wasn’t until I left that I was able to live my own life and not feel the pressure of everyone else watching me, you know what it’s like when you’re at college. When people say “Oh my gosh! You slept with that person…” until I could live it for myself I couldn’t feel comfortable in my own skin.

“The first person I told was my brother because we’re only fifteen months apart, we’re really close, he went to drama school and he took the words out my mouth by saying, “Is this the part you tell me you’re gay?” and I was like “yes!” and he was fine with it. To tell my Mum I had to drink a whole bottle of red wine and I was sat on the couch and I said to my brother, “Scott can you tell her?”, so he started speaking and said “Mum, Nick…” and I just cut in and said “I’m gay!” I needed that pressure to get me to say it and it was fine, my Mum was a bit shocked, I don’t think she was expecting it.”

Ella describes herself as a “drag beast from the east” and “like a desperate housewife of Dagenham”. Introducing herself, she said: “[I’m] a yummy mummy – a bit garish, a bit classy, a bit Essex-y. I’m very sarcastic and dry.”

Ella has been doing drag for two years. When asked what inspired her, she said: “My drag is the feminine side of me – which as a male actor I’ve never been allowed to show – so it’s two fingers up to everyone who has ever told me I must look like a leading man. Now I am both the lead man and lead woman.”

Her first job was as a backing dancer on X Factor for Olly Murs and Eoghan Quigg.

Theatre credits include Peter Pan, Book Of Mormon, Joseph and The Amazing Technicolour Dreamcoat, Fame, Cats and Wicked where she covered nine people.

“There was one show I sang every single male line in the opening of Wicked. Everyone was off,” she said.

Last year, she started rehearsals for Hairspray, but Covid-19 hit and the production was halted.

On appearing on Drag Race, Ella said: “I am looking forward to the singing challenges and dancing challenges where I know I can excel.”

When asked why she should be the next Drag Race superstar, she said: “I’m bringing all the skills I’ve gained for the last 14 years.

“This competition is testing everything I’ve ever learned. In the short time that I’ve been doing drag, I’ve really pushed myself. I don’t do things by halves.”