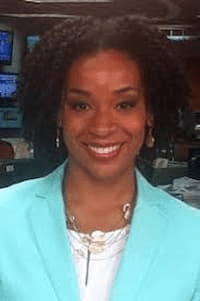 Candance Sweat is a media personality serving as a reporter on NBC 5. She joined the NBC 5 team in April 2019 as a general assignment reporter who focuses largely on the city of Dallas and Dallas County. Previously, she was News reporter at WRAL.

She was born in North Texas however, she has not disclosed the date, the month, or the year she was born.

Sweat is tall in stature but her height is undisclosed.

Sweat went to Texas at Arlington University in 2002 and later graduated in 2006 having studied Bachelor of arts in broadcast journalism. In 2007, she joined Florida State University and graduated in 2009 with a master of Science, Corporate, and public communication.

There is no information about her parents and siblings’ identities,

Despite being a media personality, she has kept her personal life secret. Therefore, she has not revealed information concerning her marital status.

Candace is a North Texas native who is thrilled to be back in the Dallas-Fort Worth area.

She joined the NBC 5 team in April 2019 as a general assignment reporter who focuses largely on the city of Dallas and Dallas County.

Her love for storytelling took her to Florida, Alabama, and North Carolina before returning home. Over the last decade, she covered a range of big, breaking news stories. She was at the coast when Hurricane Florence swept the Carolinas. She traveled to Charlottesville and spent several days in the community during the aftermath of protests and a rally that ended with the death of Heather Heyer. She was also on the scene as students and protesters toppled the Confederate monument “Silent Sam” at the University of North Carolina.

She is the recipient of awards from the Associated Press and the Radio Television and Digital News Association. In 2017, she was part of a team at WRAL-TV that received the National Association of Broadcasters Service to Community Award for the documentary “Black and Blue,” which explored the relationship between local law enforcement and black communities.

As a self-proclaimed “adventurer,” she is always looking for enriching experiences, delicious food, and interesting people in her community. She has an appreciation for the outdoors and the arts, so don’t be surprised if you spot her walking the trails or enjoying a musical.

Her annual salary is under review.