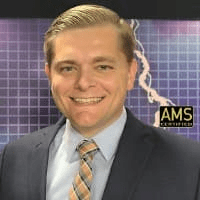 Caleb Saylor is a media personality serving as a weekend morning meteorologist for the First Alert Weather Team for ABC21. He is also a  Certified Broadcast Meteorologist. Previously, he was a meteorologist and a multimedia journalist at FOX 55.

Saylor grew up in the Fort Wayne area however his age is unknown.

Saylor is a graduate of New Haven High School, furthermore, he graduated from Purdue Fort Wayne, with a Bachelor’s degree in Mathematics Teaching.

He returned to the states and enrolled at, and eventually graduated from, THE Ball State University. He earned a Master’s of Science degree in Applied Atmospheric Science. During his time, he researched how different types of land cover can after the weather above, specifically in hot weather that can cause heat stress. He was also a part of student news organizations at BSU, including Newslink Indiana and WCRD radio.

Despite being a media personality, he has managed to keep his personal life away from the limelight. Therefore, it is not clear whether he is married, single, or in a relationship.

Caleb is a weekend morning meteorologist for the First Alert Weather Team for ABC21. Before he was a multi-media journalist at heartland media where he developed story leads and enterprise news stories that provided essential, compelling information to the community, he shot, wrote, and edited stories using AP-style writing and videography skills, and Created content for the website and social media pages with a clear message, consistent style and also Corresponded with public relations.

Prior to venturing into journalism in 2016, Caleb was a mathematics teacher at Concordia Lutheran High School in Fort Wayne, Ind where he spent half a year teaching Algebra, Geometry, and other math classes. He also spent a year teaching math in England before deciding to leave education.

In 2017, while finishing coursework at Ball State, Caleb landed his first job in television in Fort Wayne at WFFT, FOX 55. Over the 4 years spent as a weekend meteorologist and multimedia journalist, he covered every type of weather both from the field and the studio, including tornadoes in November, summer Derechos, to the winter snow storm in February 2021. He also spoke to local students and organizations to teach about thunderstorms and how weather impacts your life.

In his free time, you will likely see Caleb out and about Fort Wayne, playing soccer, grabbing some grub, or at a Fort Wayne FC match. He is a big supporter of the club and currently serves as the Media Manager for the organization.

Caleb Saylor Salary and Net Worth