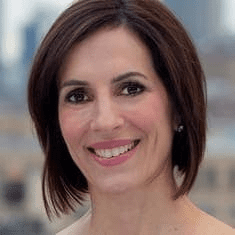 Annika Pergament is a media personality serving as national news and special reports anchor for Spectrum Networks. Previously, she was the co-anchor of Mornings On 1, a newscast that airs weekday mornings on Spectrum News NY1, and the senior business anchor.

Annika is the daughter of Ingrid and Henry Pergament of North Salem, N.Y. Her father owns O’Henry Film Works in New York, a photo-finishing company while her mother is its president.

Pergament is married to his husband Michael Patrick O’Looney, the managing director and head of corporate communications for Barclays Capital and Barclays Wealth in the Americ as. Prior to this position, O’Looney ran corporate communications for Merrill Lynch. He is also the former deputy police commissioner for the New York City Police Department and was a television anchor and reporter for CBS News, WCBS Television, and New York 1 News.

The couple was married in Bedford Village, N.Y. The Rev. Dr. Paul Alcorn performed the ceremony at the Bedford Presbyterian Church.

O’Looney, born on November 3, 1965, graduated from Marist College. He is the son of Diana and James O’Looney of Utica, N.Y. His mother retired as a remedial reading teacher at the General Herkimer Elementary School in Utica. His father retired as a professor of advertising and design at the Mohawk Valley Community College in Utica.

Prior to joining the new national team, Annika was both the co-anchor of Mornings On 1, a newscast that airs weekday mornings on Spectrum News NY1, and the senior business anchor, where she regularly interviewed entrepreneurs, business owners, and CEOs.

Annika joined NY1 in 1994, first as a political reporter covering city and state government. In 2000 she moved to WCBS as a consumer correspondent. After a few years at WCBS and Court TV where she anchored live trials, Annika returned to NY1 on the business beat.

As a veteran journalist, Annika has covered a range of stories including the terror attacks of September 11th, the financial crisis of 2007-2008, Superstorm Sandy, and the coronavirus pandemic.

Annika has also appeared as herself in a number of films and TV series including The Sopranos, Law & Order SVU, Mr. Robot, and Jack Ryan: Shadow Recruit.