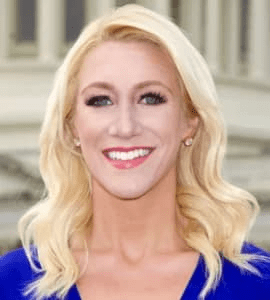 Anna Wiernicki is a media personality serving as a Washington D.C., Correspondent for Nexstar. She joined Nexstar Media Group in June 2015 as a Texas Capitol Reporter. Previously, she was a General Assignment Reporter for KAMC News in Lubbock.

Wiernicki is in her 30s. She was born in Woodlands, Texas, in the United States.

From 2007-2008, Anna attended The American School in London followed by The John Cooper High School from 2008-2010. In May 2014, she graduated from The George Washington University with a degree in Political Science and a minor in Journalism and Mass Communications.

She grew up in the Woodlands, Texas. However, there is no information about her family background, parents’ identities, and siblings.

Anna is engaged to his fiancé Ryan Burns. The couple will tie a knot on October 29, 2022, at Rosemary Beach, Florida.

Wiernicki is a Washington D.C., Correspondent for Nexstar. She joined Nexstar Media Group in June 2015 as a Texas Capitol Reporter. Previously, she worked in Austin, Texas, for two years as the statewide political reporter. She was also a reporter for KAMC News in Lubbock.

After three years in the Lone Star State, Wiernicki is happy to be back in Washington. She has interned at CNN, ABC’s Good Morning America, Fox 26 KRIV in Houston, Fox 5 WTTG in Washington D.C., and the office of Congressman Kevin Brady (R-Tx.)

Outside the newsroom, Wiernicki enjoys catching up on politics, traveling, and visiting her family in her hometown of The Woodlands, Texas.