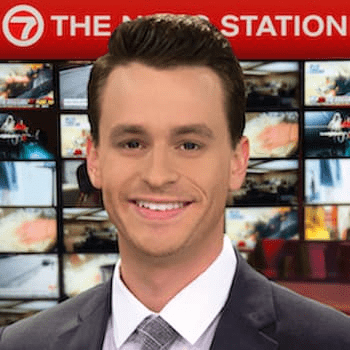 Andrew Dymburt is an American media personality serving as the anchor of “World News Now‘ and “America This Morning” on ABC News based in New York. Previously, he was a correspondent for ABC News based in Washington, D.C.

Dymburt is in his 30s. He was born in Flushing Queens.

Dymburt is American by nationality.

He graduated from Marjory Stoneman Douglas High School. He also earned a Bachelor’s Degree in Communications from the University of Miami (FL). At Miami, he served as the University’s play-by-play announcer for Miami Hurricanes football, basketball, and baseball programs.

Andrew was born in Flushing Queens but grew up under the southern suns and sky-blue waters of South Florida. He was raised in Coral Springs, a suburb of Fort Lauderdale. However, there is no information about his parents. He hasn’t also revealed whether he has siblings or not.

Despite being a media personality, Andrew has managed to keep his personal life away from the limelight. Therefore it is not known whether he is married, single, or in a relationship.

Dymburt is the anchor of the overnight news program “World News Now’ and the early morning anchor for
“America This Morning” on ABC News based in New York since May 2021. Previously, he was a news correspondent for ABC News based in Washington, D.C.

He joined ABC News from South Florida’s WSVN-7 where he was a reporter covering breaking news and politics. Notably, Andrew traveled with Marjory Stoneman Douglas High School students, teachers, and parents from the State Capitol to the United States Capitol, covering the March for Our Lives movement in the wake of the tragic mass shooting. As a Coral Springs, FL, native and graduate of Marjory Stoneman Douglas High School, the tragedy had a profound, unique impact on his reporting. Andrew also reported extensively on Florida politics, including the 2018 gubernatorial race.

Previously, Andrew honed his breaking news skills at KOIN-TV in Portland, OR, covering the 2016 Election Day riots and the massive Eagle Creek Wildfire, as well as at News12 in the Bronx and Brooklyn, where he reported on Eric Garner’s death and the beginning of the Black Lives Matter movement.

Prior to his time at News12, Andrew served as host and multimedia journalist for “Buzz:60” on Yahoo! and USAToday. He also covered the New York Jets for an online publication and worked on SportsNet New York’s television production team for the New York Mets.

Dymburt began his broadcasting career as an intern for Fox News Channel’s late-night TV talk show, “Red Eye with Greg Gutfeld,” before moving on to help launch ‘Chasing News’ on FOX5, FOX29, and MY9 in New York City and Philadelphia. While at Fox, he was one of the first journalists to survey and report on the damage from Superstorm Sandy along the Jersey Shore.

Dymburt is also a skilled musician, he can play the saxophone, trumpet, and piano.

In 2006, Andrew was diagnosed with Type-1 Diabetes and has been actively raising awareness about the disease ever since.

He has a net worth ranging between $1 million to $5 million.