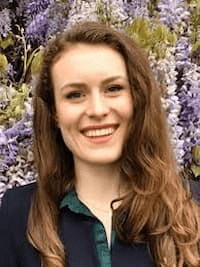 Amelia Harper is a media personality serving as a freelance News Correspondent for TalkTV’s evening news programme The News Desk. She joined TalkTV in May 2022. Previously, she was a Bulletins Presenter at GB News.

Harper is British by nationality.

Amelia graduated with First Class Honours in Geography from Durham University in 2018. In 2019, she earned a Master of Arts in Broadcast Journalism from City, University of London.

While at Durham University, Amelia was a Student Broadcaster for Team Durham. Her job involved broadcasting on social media both live and recorded, interviewing student-athletes, and commentating on sports.

Harper is in a relationship with Callum Stewart.

Harper joined TalkTV in May 2022. Prior to that, she was a Bulletins Presenter at GB News presenting news bulletins every 30 minutes throughout the day. She was also responsible for the smooth launch of the channel’s bulletins.

She joined GB News in May 2021 as a Television News Reporter covering national news and stories in the East of England and self-shooter for all lives and packages. Harper also covered foreign affairs; she was the channel’s reporter/correspondent in the months covering the Taliban take-over in Afghanistan.

After graduation Harper began her journalism career at ITV News. She also worked at London Live ESTV as a News Reporter. In addition, she served as a Broadcast Journalist where she read the News Bulletins on Global brands. She also reported for LBC and LBC News in the East of England.

Amelia Harper Salary and Net Worth