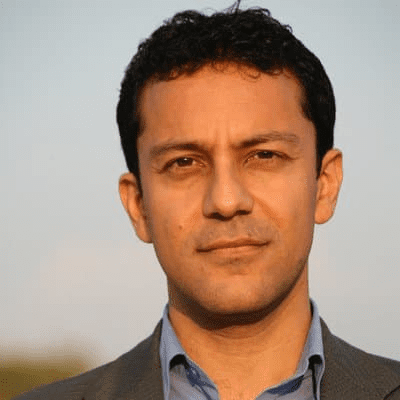 Aleem Maqbool is a media personality serving as a Religion Editor for BBC News. He was appointed to the position in December 2021. Previously, he has been the North American Correspondent for BBC News since 2014.

Maqbool is around 30 -40 years old. However, his exact age is undisclosed.

He is an English national. He also belongs to the Asian ethnicity.

Maqbool studied Master in Neuro Science. However, he was fascinated with Journalism and ended up being a journalist.

Maqbool has kept his parents out of the limelight. Therefore, there is no information about them. He has also not disclosed whether he has siblings or not.

When it comes to his personal life, he is very private. Therefore, it is not known whether he is married, single, or in a relationship.

He hasn’t also disclosed to the public whether he has kids or not.

In December 2021, BBC News appointed Maqbool as its new Religion Editor. Maqbool has been the North American Correspondent for BBC News since 2014. That role has seen him posted in Washington DC for the last seven years.

He has been with the BBC for nearly 20 years. Former positions with BBC News include serving as its correspondents in Pakistan and later Gaza and the West Bank.

He took up his new role as Religion Editor in the spring and he will lead the BBC’s expert analysis and insight on the major themes and issues affecting different faiths in the UK and around the world.

“I am delighted to take up a role that focuses on telling stories associated with faith and ethics and reflecting on the complex way in which they continue to shape our society. After many years in foreign news I also look forward to working with a wonderful team in London,” he said.

Commenting on his appointment, Jonathan Munro, Deputy Director of BBC News and Head of News Content, said: “Aleem has always been an exceptionally thoughtful reporter and analyst with journalistic drive and a strong vision for reaching new audiences and delivering on digital. I think he’ll be fantastic.”

In 2008, Aleem retraced the Christmas journey made by Joseph and Mary in the New Testament. In an article, he explained his motive.

“For all the sacred places in this region – Jerusalem, Bethlehem, Nazareth, Jericho – it is the land in-between where you can often feel most connected to history. The hills and valleys have played a part in so many of the stories that still shape the lives of millions around the world today. Whether you believe Mary and Joseph’s walk ever took place or not, most of us became familiar with the story at a young age.

Many of us are even scarred by embarrassing moments acting in school nativity plays – or perhaps that is just me… I once played a sheep. If it did happen, the journey of around 150km (93 miles), along Roman roads and dirt tracks, is likely to have been an arduous one, particularly for a heavily pregnant woman. What does not get included in the nativity plays, is the probability that the couple also faced hostility from Samaritans who lived in what is now the northern West Bank.

Of course, there are new difficulties today. The supposed route goes through areas of continued conflict between Israelis and Palestinians. Army incursions, militancy, and checkpoints manned by soldiers are commonplace, and all have the potential to interrupt my journey. Still, the notion of a walk from Nazareth to Bethlehem is, for me, a romantic one.

When I have told people here what I intend to do, they have generally seemed quite amused, but understand that it is a vehicle to tell modern-day stories along this ancient route. It will hopefully help me to get to know at least a little bit more about this complex land by getting to hear people’s stories on the way. For carrying daily provisions and equipment, a donkey seemed as practical a solution now as it might have done two millennia ago, and will, of course, be an added connection to the tale that inspired the journey.”