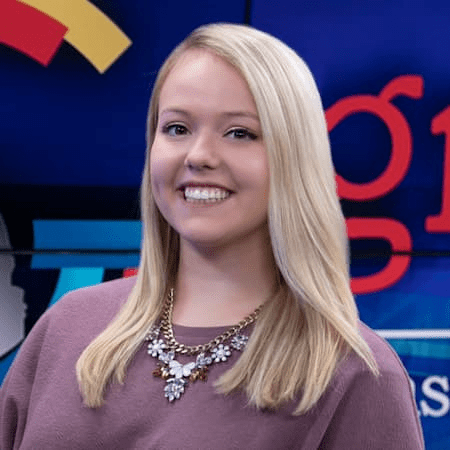 She is 26 years old. She was born in Philadelphia.

Grim is of American nationality.

There is no information about her parents. However, Natalie was born and raised in Philadelphia. She also has a sister named Maddie.

On May 2, 2020, she wrote on Instagram: “I watched my sister graduate by seeing her name on the TV in my bedroom instead of walking across the stage this m orning. Still, congrats Maddie on all your hard work, and one day we’ll be able to replace this high school graduation photo with a college one!”

Natalie isn’t married. Nevertheless, she hasn’t revealed whether she is single or in a relationship. In her social media accounts, she has posted a number of pictures with a guy named Greg. But, none of them has come out publicly about their relationship.

Grim serves as a Multimedia Journalist reporting on Capitol Hill and all things politics for Gray Television. She joined the Gray Television Washington News Bureau in June 2019.

Before joining the team at Gray, Grim worked as a reporter and producer for Circa and Sinclair’s National Desk. While there, she produced original live shots for social media on everything from protests to puppy yoga. Her live streams, as well as her viral videos and web stories, were shared on local news sites and social media across the country.

When Grim isn’t behind the camera, she enjoys re-watching sitcoms on Netflix, attempting to do yoga, and constantly refreshing Twitter.