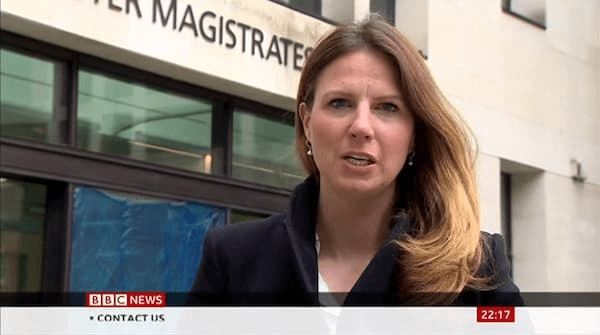 Helena Wilkinson is a media personality serving as a news correspondent at BBC News. She is also one of the journalists behind Tomorrow’s Paper Today.

Wilkinson is in her 40s. She was born on September 16th in the United Kingdom.

Wilkinson graduated from the University of Derby with a degree in Journalism.

She was born and grew up in the UK. However, she hasn’t revealed any information about her family background, parents’ identities, and siblings.

Helena was previously married to her husband Iain Lee, an English broadcaster, writer, and former television presenter and stand-up comedian who hosts the phone-in talk show The Late Night Alternative on “pay to view” Patreon.

Lee’s career began in the 1990s as a stand-up comedian before he gained nationwide fame as co-host of The 11 O’Clock Show from 1998 to 2000 and the breakfast show RI: SE in 2003. He then embarked on a full-time radio career in 2005, hosting mainly talk-based shows on LBC 97.3, Absolute Radio, BBC Three Counties Radio, BBC Radio WM, and talkRADIO, which earned him numerous radio awards. In July 2020, after his contract at talkRADIO was not renewed, Lee launched his Twitch show.

The couple divorced on March 2018 even though they have two sons.

In July 2019, Lee came out as bisexual on his radio show, something that he had felt embarrassed about and tried to handle with drugs and being unfaithful. He credited sessions with a therapist to deal with his depression, which began when he started having sex with older men at fourteen.

In September 2020, he started a college course to become a counselor.

Wilkinson is a news correspondent for BBC News. She has reported a number of stories since she joined BBC News.

On March 20, 2020, people catching up on the news at home were slightly distracted as a person in a fancy dress appeared behind Wilkinson, staring into the camera before walking out of frame. Wilkinson was reporting from Leicester Square, London, showing how a usually-thriving tourist area was left empty following Prime Minister Boris Johnson’s latest speech, commanding social venues to close to help contain the spread of the novel coronavirus.

“It feels very strange to be standing in the middle of Leicester Square, the heart of London, on a Friday evening,” Wilkinson said.

“It is nearly deserted here.”

Wilkinson wasn’t alone for too long, as she was soon joined by someone in the background, who’d decided to intrude on the live news broadcast while wearing a strange fancy dress get-up that involved a mask and admiral’s hat.

The moment didn’t go unmissed by viewers at home, with many sharing the clip on Twitter in disbelief.

Helena Wilkinson Salary and Net Worth